Khun Poh Ang Bak Is One Durian Worth Visiting Penang For

Most durians come with a very distinctive feature even though that feature might not be unique to them.

But it is enough to make up part of the special attributes that a cultivar identifies with.

For example, black thorn is known for, and aptly named, with reference to it’s flower stamen at the bottom. D24 is known for it’s alcoholic taste which play a long way to having it’s nickname XO. D17 has a reputation for it’s coffee aftertaste. And musang king is known for… being musang king.

The fun with the naming of durians is a great reflection of the lighter side of how the durianers approach their hunt for the king of fruits to satisfy their sinful cravings.

It’s not uncommon to hear about long dramatic stories of how people embark on an adventurous journey in search of a particular type of durian with a special feature they have heard about.

We just gotta catch em all.

Some people chase the floral taste, some want to sample the milky chocolate taste, some want to have their tongues numbed like how others have portrayed, some want to give a go at very dry durians, and some would even go to great lengths to see for themselves a legendary tree deep in the jungle that is over 100 years old and devour it’s fruits directly after the drop.

Those who find durians as repulsive as underground sewage might think that we are crazy. But we know that they will never truly understand it… because in all honesty I don’t really understand it enough to put into justifiable descriptive words too.

I have thought about words, terms, phrases, metaphors and quotes to describe it for years. And I still haven’t found the words that I feel does justice to it.

Anyway if you are one of these durian hunters, then you must absolutely get acquainted with Khun Poh Ang Bak.

The historical records of this cultivar was that the grandmother tree was first planted by Mr Liew Khun Poh in Singai Pinang at the Balik Pulau area more than a century ago. Even though the tree has long died, Mr Liew’s legacy goes on as the tree was cloned when it was still very much healthy.

Legend was that he initially named the fruit after himself as Khun Poh. But when MARDI finally registered the cultivar as D164 in 1987, it registered with an official name as Ang Bak which is hokkien for red flesh, or red meat.

It then swept the champion first prize in the 1991 Penang durian competition.

Today, most of the old tree supply comes from the Khun Poh durian farm managed by the descendants of Mr Liew.

If you cannot wait to sink you teeth into this beauty of a fruit, it is recommended that you make your way down to Penang to do it. And I’ll explain why later.

I also feel that it should be mentioned that this durian has a hot streak of having it’s seeds grow into great durian trees in their own right. It must have been that this was the farming trend during the days when it was a bonafide superstar in the durian world.

A couple of the better known ones are little red and 600.

A few more that are rumoured to have originated from khun poh seeds, but cannot be verified, are Ang Jin, Ank Bak Kia, 700, etc.

This is a generally big durian with the average size just under 2.5kg.

The husk colour is a pale yellow-green.

See: Join the durian community on fb to see my durian escapades 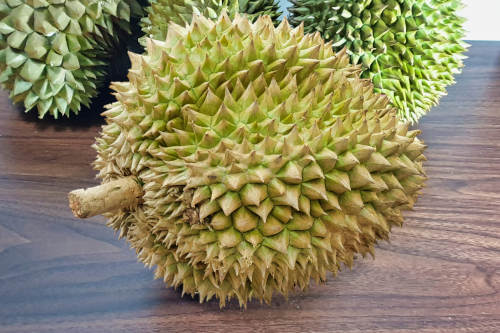 The shape of the husk is concave at the segments that hold the pods of fruitlets. For one with 5 segments, if you view it from the top down or bottom up, it can remind you of a star fruit.

The spikes point at all directions known to mankind. The pointed ends are curved and hooked akin to flames from a campfire. And they converge at the point where each segment meet, which is also where the seams are located.

This wicked looking husk looks somewhat sadistic. If Darth Vader does consume durians through that ridiculous mask of his, then kun poh ang bak is the one he’ll pick.

From a visual perspective, it is like 5 individual segment pockets of durians sewed together to combine into 1 complete package. 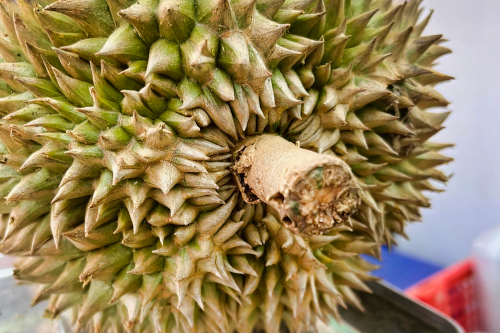 Because of the crazy party of a spike arrangement, one has to be extra cautious when opening this durian to avoid getting pricked.

A distinctive characteristic of kun poh is that it has a relatively short stem. Usually around an inch give or take.

The moment you’ve managed to crank this durian open, you will instantly notice the strong aroma and trademark reddish-yellow colour that gave it it’s name.

It’s one of those amazing colours that would make you go WOW!

But the colours and cream puff appearance are really not what this durian is best known for.

You will find out the moment you pick up the fruitlet… as it has one of the wettest textures around. Probably somewhere between an ice-cream and a milkshake.

In fact, the odds are overwhelming that you will find it’s sticky flesh leftover on your 5 fingers and even your palm as if spreading peanut butter on bread.

There is absolutely no chance that you will not be licking your fingers like a purring cat with this durian.

An implication of this soft watery meat coupled with it’s thin skin is that if you shake it too hard when picking durians, or hit it against the ground when you attempt to open it, “water” can actually leak from the minor tears created on the skin.

The main taste is sweet and just a little bitter. It also comes with a unique orange-like citrus flavour.

Another positive attribute of khun poh is that it is impressively consistent. Meaning your khun poh bought tomorrow or the day after would most likely taste the same as the one you gobbled down today.

However with such a wet durian, it gets wetter pretty fast as it ripens. And those who have eaten riper ones would be able to taste a weird sourness in the midst of the contrasting flavours.

Just take a look at the side with empty pods when you open this durian. There’s every chance that it would be wet. Where do you think the water came from?

This is the reason why if you want to try good quality Khun Poh Ang Baks, you would have to take a trip to Penang so that you would be able to grab it within 2 hours of the drop.

And because you would be consuming it within such a small time frame from it’s drop, there is every chance that you will feel the numbness in your bite too.

If you think that it’s impossible for a durian to make it from tree to consumer within 2 hours, you are underestimating how developed the durian logistics are in Penang. They might not look the most modern in technology, but be assured that they are as efficient as you can imagine.

It would be nothing short of a miracle for this durian to make it’s way to Singapore while retaining it’s quality.

The lesson to be learned here is that if you love durians and happen to be in Penang, Khun Poh Ang Bak is one durian that you must pick up while you have the chance to taste it the way it should be.

Seeds on this one tend to be big. But don’t rule out the outliers that come with smaller flatter seeds. The expert insider talk is that those with bulging husk would have huge seeds. And those with slimmer bodies have a good chance of carrying smaller seeds.

Premium Ang Bak grown on older trees will have a stronger bitter taste, and the flesh can be stickier too.

There is also a lesser variant called little red durian (小红). It also comes from the seeds of the original tree, but somehow turned out different. The husk is greener, generally smaller, and the flavour is weaker than khun poh.

The harvesting period is typically an earlier one lasting from May to June.

This is a durian that Penangites identify with. So if you are unable to find it at a durian stall, just ask and the seller would most probably proudly offer advice on how to procure it without having to make your way to the Khun Poh farm.

If you find this cultivar in a distant place like Singapore which is quite faraway from Penang, the odds are that it would have degraded quite a bit even though it might have started the journey there as a premium fruit.

This is assuming the fruits actually make it through the trip without wetting itself from all the bumps encountered on the road.

D11 Is One Durian That Will Wait For You

If you have just entered the world of durians, what led you here might have been the guilt-ridden seductive taste of musang kings. After all, musang king currently rules the land in Malaysia and Singapore by virtue of it’s incredibly …
END_OF_DOCUMENT_TOKEN_TO_BE_REPLACED

What Is Chanee Durian Best Known For?

The black pearl is an outlier in the world of durians. This attribute can probably be compared to the geeky kid in school who minds his own business w…
END_OF_DOCUMENT_TOKEN_TO_BE_REPLACED

What Factors Goes Into The Pricing Of Expensive Durians?

The Golden Phoenix (jin feng) Is A True Original Of Durians

How Tekka Durians Came To Be Known As Musang Queen

The Risks With Buying Dehusked Durians In A Box

D199 Bola Durian Will Give You A Ball Of A Time